Many and One Direction 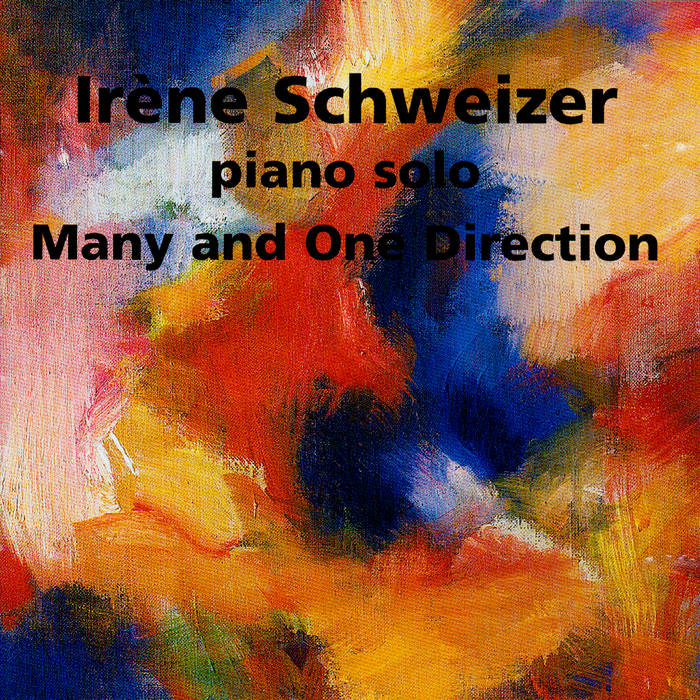 «Many and one direction» – this is the title of a picture painted by the Swiss artist Sonja Sekula in 1958. Dark brush strokes extend in all directions over a light ground, bundles of straight and curved lines, barely visible white and nuances of pale blue. Seen from afar, they form an almost weightless figure.

«Many and one direction» – this is also the title which Irène Schweizer borrowed for her fifth solo CD, a descriptive title, and one which speaks of an elective artistic affinity. After many years in New York, Sonja Sekula lived in Zurich until her death in 1963, and it would have been perfectly possible for her to have met the 23 years younger Irène Schweizer – for example in the jazz club «Africana» which both women frequented. The pianist's enthusiasm for the work of this artist, who was until recently virtually unknown and is now recognised as an important Swiss painter, has remained constant over the years. «We have both been criticised for not having a proper style. It's true that she painted in several different styles with various techniques, but her personal stamp is unmistakable. And that's exactly how I work as well».

Variety as a programme – this is a fitting description of Irène Schweizer's piano music. It contains everything from A to Z: improvisations that arise on the spur of the moment – instant composing; themes which she uses as a starting point and alters in the course of free invention; compositions which she treasures and retains as a permanent part of her repertoire; pieces «in the style of», which she plays as a homage to important musicians; and, finally, crucially, her musical material which consists, as in the work of Sonja Sekula, of constantly recurring motifs. In the works of the painter, these motifs appear as form-building figurative or abstract elements. In Irène Schweizer's art, they are the rhythmic and melodic germ cells which structure and inspire her music.

And inspiration is certainly essential to the music on this CD, for Irène Schweizer, who is used to dialogues with duo and trio partners in a concert atmosphere, plays here alone and without an audience, focused entirely on herself. A rarity. «Sometimes I simply dive in and start somewhere, anywhere, and let myself drift. And suddenly a phrase emerges which I use in the musical proceedings and which I may later repeat or vary. But I never write anything down beforehand.« Is this, then the famous, much-prized artistic inspiration which descends upon the artist like manna from heaven? Anything but!

Irène Schweizer draws from very earthly musical sources which she has acquired over more than forty years: innumerable jazz styles and techniques from traditional jazz and hard bop to free jazz, South African black music, white classical modern and avant-garde music, minimal music, collective experiences of the Feminist Improvising Group. The jazz of the 1950s remains her focal point, her musical home; its rhythm is the driving force of her phrasing. «I am a jazz musician, and I also improvise freely.» She has long since dissociated herself from the crazy, witty power play with which she is still sometimes identified. «Demonstrations of skill, for its own sake, elbowing one's way through life, playing a great many notes very loudly in a short time - none of that interests me any more. Nowadays I try to give my pieces more space, I let them breathe. Perhaps people will say my music has grown more conventional, but maybe it is just more mature.»

Irène Schweizer's new solos have an almost classical – or perhaps classicistic – sound. But this is only the surface. Those who goes deeper suddenly find themselves in an atmosphere of calm in which the dramaturgy of the thirteen pieces seems to follow of its own accord. Impressionistic sound patterns alternate with rhythmically complex songs which radiate a wondrous joyfulness. Subtle sophistries in the interior of the piano give way to an uninterrupted 12-bar blues. An unknown, heavenly ballad by Thelonious Monk forms the opposite pole to an impetuous, wildly articulated theme by Carla Bley. A hyper-nervous Sisyphus tears through the scene, and a melancholy Spring takes its course. In the midst of it all is, Irène Schweizer, sovereign, completely in charge. She plays with traditions, evokes John Cage, says hallo to Erik Satie, bows before Don Cherry, plays a Dollar Brand finale Ð which is in reality her own work. Her piano playing is powerful, linear, often percussive on the keyboard, strings or wood, extremely fine-spun, airy and witty. Romantic wallowing in great surges of sound is not her way. She leaves this to others.

«I love clarity, transparency, unembellished simplicity.» Yet this music is anything but cool and distant because the listener is immediately involved in its genesis. The constantly recurring motifs – a scrap of melody, a brief rhythmic series of knocks, two notes played together – are the terrain over which we move, hand over hand. Freedom from vertigo is not guaranteed, surprises are the order of the day, for even with minimal material the artist never runs out of ideas. Irène Schweizer's feeling for form is so phenomenal that she is constantly being asked about it. She forms the music in her head, in her ears, on the keys. Not on paper, for how would it be possible to write down all these nuances? She does not squeeze her pieces into a corset but gives them a framework in which they can develop. The form is not an end in itself, but a necessity. Although everything has its place, nothing is fixed; everything is free at any time to dash away, to jump, to fly. Free structures, that's what this music is made up of. And there is never a note too many. No meaningless runs, no tinkling just because the piano has such a lot of keys. Everything hits home. «Everything I touch has become a little calmer. I try to cultivate the art of leaving out notes. Fewer notes, more music.»

The art of leaving out. This is where jazz meets up with new music. Miles Davis propagated it, but so did Anton Webern and John Cage. Irène Schweizer knows both. She is fascinated by the New Viennese School, above all by Webern's shortest compositions which are reduced to an absolute minimum. And of course, Cage, who prepares the strings of the piano and thus opens up new worlds of sound in the interior of the instrument. Cage, who for a time lived in the same house in New York as Sonja Sekula, along with Merce Cunningham and Morton Feldman. A coincidence indeed: the elemental rhythm of jazz. The supersensitive sounds of the avant-garde. The apparently random signs of experimental painting.

«Many and one direction»: Irène Schweizer goes in many directions and never loses her orientation. With a clear mind she finds her way among the confusion of influences, traditions and styles. Whatever she plays, her individual stamp is unmistakable. Her music is the opposite of musical environmental filth, but also of purism and sterility. It is the concentrated musical experience of forty years. Clear, unembellished, direct music with a sense of humour. There is no-one else who plays like this.