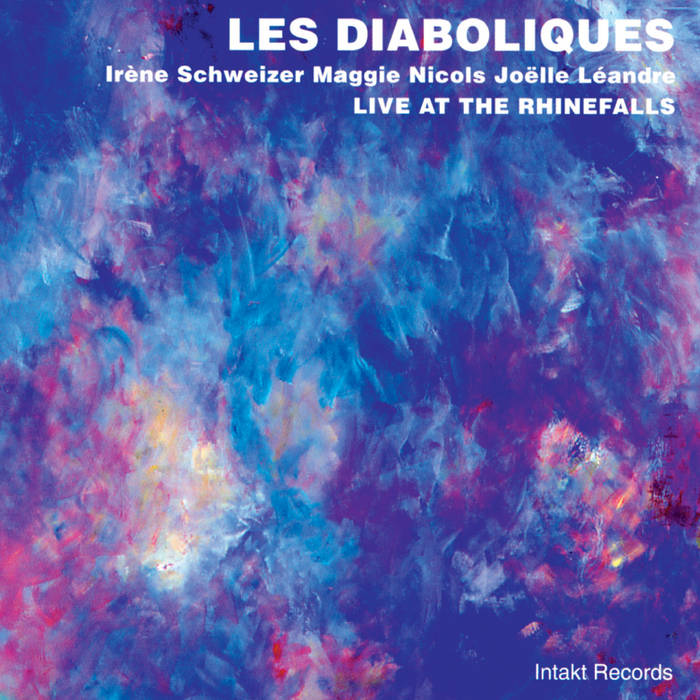 Music is designed to work long-term. In this case, the responsibility for the music is revealed in a carefully considered and convincing choice, made from the wealth of the artistic possibilities. As a consequence, emphases arise that allow one to experience the most varying artistic positions. In order to understand the entire artistic intention, one must follow the music over the years. This approach for music can only benefit the listener. The youngest example ­ and third recording of the rousing trio: Les Diaboliques. «Live at the Rhinefalls.»

This live CD is without a doubt the strongest one of the «wild senoritas.» A pure earthly delight: a butterfly on a sleeping python that has just devoured a young deer. Recorded in Irène Schweizer¹s home city of Schaffhausen. Voilà ­ the home game as a fait accompli. Unfortunately, I was not present but remember their playing in my corner of the country, in Sedrun in the Bünder Oberland, with great pleasure. They were simply heavenly. Of the highest composure, of the highest concentration. Maggie alone ­ she must be the new English synonym for «magic» ­ was deep and spiritual like a glass of Lagavulin (please allow me to make a small advertisement for the premium single malt from Maggies¹ home), then bittersweet like English breakfast jam. Irène played an enthralling solo. Everything was in it, from Jelly Roll Morton via Art Tatum, Bud Powell, Thelonious Monk all the way to Irène Schweizer «in her own sweet and sour way.» During the entire solo, Maggie lay flat on the ground. When Irène finished, Maggie stood up skipping and, with outstretched arms, whispered «refreshed.» Joëlle slaved away but had the lightness of a Calabrian bricklayer who happily sings while working. In the end, the triumphal finale. Maggie, Joëlle and Irène leave the stage, crawling on all fours: «Entre les hommes il y a un tel serieux» (as Joëlle says in the soundtrack to the movie The Laughing Outsiders).

I listen into the music of this CD. As Tschaikovsky said, «A difficulty overcome becomes beauty in art.» I experience this beauty as a space, colorful and sensuous, with depth and movement ­ like the oscillating cover of the painter Rosina Kuhn (by the way, the third nice job for their female friends). For instantaneous moments, there is nothing else. The intensive experience of a moment, the feeling of being fully lifted in time, a feeling that appears not to know consciousness for the past and the future: this belongs to many, to all (?) sensations of beauty. Anything that radiates beauty causes something in me to resound, about which I can only say after it has passed: I was entirely with myself and in the world at the same time; first and for a moment with faltering breath, then completely taken in and sunken, marveling, swept along with the music, excited without effort and also peaceful, spellbound by the magic that hits me. A feeling of joy. Composed, undisturbed beauty. Nothing is mediated. Everything is itself. Yes, it is powerful and humorous at the same time. On the apparent secondary paths, there is not the slightest trace of hesitation or obstructive thoughts that could mislead the free imagination. Here or there, or over there, they change the direction again and again or let themselves, in love, float from an idea to the next, as if each idea were the main current of the story. Or the rivulet unexpectedly widens to a body of water ­ the river to a delta, the delta to the ocean ­ until we suddenly recognize that everything is pushed to the world¹s ocean, and that even the apparent excesses are only a part of an all encompassing wasteful excess.
Liner notes by Werner Lüdi,