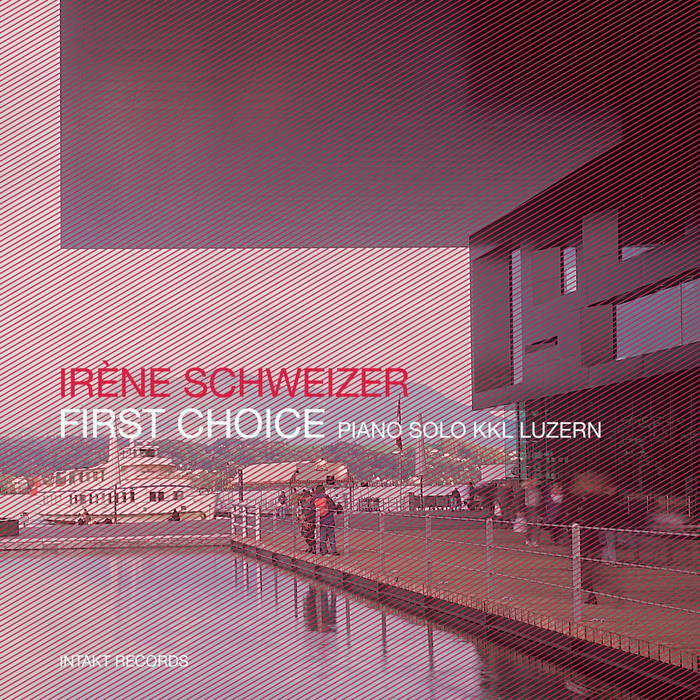 Sometimes there are special occasions for no special reason, even without a “round” birthday – as at the Cultural and Congress Center in Lucerne (KKL) on October 8, 2005: Irène Schweizer performed in one of the world’s best classical-music concert halls, bringing her own culture and people along and raising the temperature of this perfectly cool space for a few hours.

A first, long improvisation called “First Choice.” For twenty minutes, Irène Schweizer unwound for the evening, arriving, in the course of this long-distance run, at one of the wild African dances her audience loves so much. With the ambitious second improvisation, “Into the Hall of Fame,” Irène made her definitive entrance into that hall, and as the audience did not care about the usual KKL coolness and communicated its appreciation to the artist on the stage, the distance between them was soon overcome. Irène addicts knew the tender “Ballad of the Sad Café” from previous concerts and her CD “Piano Solo I.”(Intakt CD 020). Afterwards, she humorously scratched at the varnish of the luxurious building she was playing in. She would later call this restrained attack “Scratching at the KKL”, in which she rode the piano strings with finger cymbals, felt mallets, and a red Chinese toy drum. Next, “Loneliness of the Long Distance Piano Player” provided an ironic perspective on the inner life of such a pianist, its title based on Alan Sillitoe’s novel “The Loneliness of the Long Distance Runner.” Every solo pianist is alone on stage, but even more alone in the KKL, and an hour of solo playing here means at least a 5000-meter run. She concluded with homages to her piano favorite Thelonious Monk (“Oska T.”) and to Don Cherry (“Jungle Beats II”). The “II,” by the way, makes clear that Irène is not only a free improviser but also a prolific composer in her own right – of compositions that are new and different every time. No encores – the audience could clamor as much as it liked; that was enough.


REVIEWS:
Pianist Irène Schweizer has earned the status of artistic royalty in her Swiss homeland. The recital presented on this new Intakt disc was part of a larger celebration celebrating her achievements, a day that included several concerts, a screening of the biographical film Portrait and a lavish dinner reception in her honor. The venue itself, a grand conservatory space regarded as one of most acoustically pristine in the world, was also proof of the confidence and fondness placed in her by the creative community of which she is a focal part. Schweizer was reportedly pleased by all the sincere pomp and circumstance, but her primary desire remained the chance to play the piano for the pleasure of an audience and her own. She stuck to this personal directive and turned in another highly personal and musically complete performance.
Drinking in the results, which clock at just under an hour, I found myself reflecting on Keith Jarrett, specifically his newly released Carnegie Hall concert on ECM and making snap, if possibly erroneous, comparisons. Jarrett commands a similar level of respect, albeit on a world stage. His concerts are considered cultural events; high-ticket items easily rivaling their classical counterparts in terms of aesthetic cachet. The rushing swells of audience applause that append Schweizer’s pieces are included, but tastefully truncated. In Jarrett’s case, a rapturous sea of clapping hands consumes a full seventeen minutes of the Carnegie set. Jarrett’s ego is well documented, as is his disdain for those he deems of lesser talent. This arch smugness is curiously at odds with his purported humanist philosophies. Not so with Schweizer who takes her populist positioning to heart with every performance. Her music springs from a fount of internalized sources: African dance, European folk ballads, free improvisation, American jazz and blues, and so on. It’s an amalgam deeply her own, but I’ve yet to hear it sound self-serving or supercilious.
A nineteen-minute improv “First Choice” opens the set, Schweizer strolling elegantly through a conscious stream of melodic variations and warming up to the intimidating keys of the KKL’s house piano. Her patterns her frequently punctuate with porcelain-like stabs, fingers in near-constant synchronized motion, but also paying close attention to silence and space. The piece culminates on a glorious rolling groove that recalls the power and poise of Randy Weston. “Into the Hall of Fame” is half its predecessor’s size, but just as kinetic and varied, Schweizer’s hands once again working overtime in a restless confluence of staccato constructions. Five remaining pieces are miniatures that still pack in plenty of pianistic excitement and imagination. “The Ballad of the Sad Café” has the air of a Jarrett reverie, floating chords conjuring a cloud of tender emotion. “Scratching the KKL” finds her vocalizing and applying various percussive accoutrements to the strings of her instrument. “Oska T.” brings some pedal-dampened Monk to the plate while the romping “Jungle Beats II” delivers a delicious Don Cherry desert. Jarrett may justifiably hold the global crown of popularity and prestige, but with sterling recitals like this one Schweizer suggests a talent of equal standing that deserves to be more widely known.
Derek Taylor, Bagetellen, Oktober 2006


First Choice documents a gala concert in October 2005 at the Cultural and Congress Centre in Lucerne, a magnificent performing space and acoustic which Schweizer manages to both celebrate and vandallse. Gitta Gsell's new film about Schweizer was showcased on the same day, but I've no idea if it was seen before the recital. If so, the audience would have been better prepared for lrène's franctireur approach, appearing round the corner of soft melodies with brilliantly aimed harmonic snipes; she can build a tonal bridge over a few bars and then detonate it spectacularly with the minimum amount of ordinance. There are moments that resemble stride, ragtime, the blues, but the language is hers alone. Count up all the spurious Cecil Taylor comparisons in the average jazz magazine or reference book, then search for just one player who's said to be 'influenced' by Schweizer. You'll look hard. Listen hard to half the bright youngsters or established names at the freer end of the spectrum, though, and you'll find her imprint.
Brion Morton, THE WIRE, London, October 2006


Comparison between the opening bars of the lengthy title track on First Choice and Cecil Taylor's solo work reveals interesting details. Where Taylor's more reflective passages tend often to preview bombast and iconoclasm writ large, Irene Schweizer's approach to the piano seems more reflective—more prone to rumination on an idea or a fragment of an idea—and it makes for music that holds the attention more by stealth than by sheer impact. Over the course of these nineteen minutes, there isn't a second that's wasted.
There might be no little irony in a title like “Into The Hall Of Fame,” but Schweizer seems to adopt a more expansive approach here. The results reveal her idiosyncratic way with a phrase and the fact that her instrumental voice, having spent decades in gestation, is entirely her own.
Irony might not have been too far from her thoughts with “Scratching At The KKL,” either. It's the only time she goes under the piano lid, an act which in itself reveals just how deep her intuitive grasp of dynamics can be; her manipulation of strings is deft, and the low volume of the sounds she produces could well serve as a musical example of Samuel Beckett's declared wish “to leave a stain upon the silence.”
Reference has to be made to the exceptional fidelity of this recording, which indeed seems to be a growing characteristic of Intakt releases. This is arguably most apparent here on “The Loneliness Of The Long Distance Piano Player,” where the variations of Schweizer's touch are abundantly apparent.
A real mark of this disc is the degree of difference between the surface of the music and what lies beneath it. With that in mind, it can almost serve as background in the sense of being complementary to some activity other than listening itself—but deeper listening reveals the work of a fierce musical intelligence, however, and is by far the preferable alternative.
Nic Jones, All About Jazz, USA, October 12, 2006